“Part #1: The temperature of theater in the back bays of the smaller lakes in Otter Tail Lakes Country is approaching 60 degrees when the sun is out and only drops to about 54 degrees when it’s cloudy. This is significant. When the water temps don’t drop below 50 during inclement weather, the panfish don’t seem to leave the shallow areas—or at least they don’t go too far. Once the sun comes out or the weather settles, they quickly return. The water is still a little cool, so I’m not finding panfish in every bay on on every lake. They are still using select bays. So if you don’t catch a fish in a back bay spot within 10 minutes, they’re probably not there. A few bays that I’ve fished this week were still very cloudy and full of floating goo—post ice stuff—and the fish were not there. The spots where the water was more settled were the best—a lot of fish. As mentioned, this type of fishing is pretty cut and dry, they are either there or they are not, so don’t sit and wait for bites. The only adjustments you need to make is to keep changing the depth setting on your bobber. None-bobber lines work too, as long as the jigs you’re casting are 1/32 or 1/64. Please don’t cast and retrieve large jigs early in the season! Yes, you might catch 1 or 2 or 3 fish, but the other 147 fish in the area will ignore you. Cold water/shallow water is about slow-approach fishing. The best lures seem to be white 1/32 once hair-jigs tipped with pink Gulp fry. They come in a jar or a small bag. Crappies can’t say no. Sunfish say, “what the heck.” It’s good. I feel the best small-bay, early season panfish fishing in Otter Tail Lakes Country is going to arrive within the week—it’ll lap into the up coming walleye season. Get out and get some Otter Tail Lakes Country panfish—they sure are tasty. Also, know that you don’t need limits of them to have a meal or two. Throw some back, save some for next time and next year.

Part #2: It’s nearly here. Saturday May 10th signifies another MN walleye opener. The closed season has worked according to plan—the walleye and northern have spawned, therefore, there will be millions and billions of fry hatching around the county. The parent fish, who have just recently gone through the reproductive cycle are migrating back to “life as usual,” in which case, they begin food-orientated living as opposed their “survival-of-the-species” preoccupation. As anglers, this is an exciting time. What do we look for this weekend? What baits to use? As an opening weekend general guide line, search out lakes that have the warmest water. Why? Because the walleye and pike in lakes that are warmest probably spawned before their cousins in colder lakes. This is a big deal early in the walleye season. Walleye that have spawned even 3-4 days before other walleye will be much more likely to eat than walleye that have just spawned. It could be because of recovery time or maybe individual spawners have made associations with other walleye—forming schools—and are more likely to feed do to competitive behavior. As for the bait, bring a little bit of everything. Shiner minnows should be your number one bait on most lakes in the county—especially on lakes that are larger then 1,000 acres. Use caution, however, not all lakes (especially the smaller, shallow lakes in Otter Tail Lakes Country have lake shiners), so the fish may not recognize them. Night crawlers are well worth a try on small lakes. I usually carry a dozen leeches on opener weekend and rarely use them, but it’s good to have them along just in case. Jigs and Lindy Rig style presentations are both good choices. Consider using a Lindy Rig (with a 5 foot leader), and troll around until you get a bite or catch a fish. Then if fishing slows, give jigs a try. If you begin with jigs it could take longer to locate your fish—you can troll faster with a Lindy Rig and cover more water in a shorter period of time then you can with a jig. Opening weekend is a perfect time to use blue, chartreuse, glow, pink, or florescent green. Most of all this weekend, have a fun time and be safe—it is what fishing is all about.” 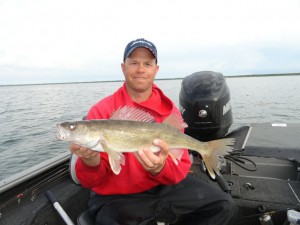