Spring Is Here? Birds Are Here! 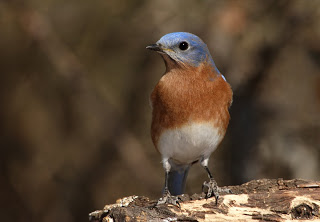 Well…Spring might still be a few weeks away. But, there have been plenty of birds hanging around the resort in recent weeks. I was sitting in the Lodge yesterday and enjoyed watching a group of Blue Jays and a HUGE Red-Headed Woodpecker. Do you enjoy birding? East Silent Resort is the perfect spot for your next birding getaway. Outside your cabin door, you have 50 acres of prime forest, wetlands, and open prairie to explore. Enjoy spectacular birding without getting in your car. Or…we are only minutes from Maplewood State Park and the Pine to Prairie Birding Trail. Visit us in May for the Festival of Birds in Detroit Lakes, MN. In an effort to update or guests on bird sightings in the area…we’ll include the area’s bird report on our blog.

Mother nature is teasing us this week with calm , sunny days and cold nights. There have been several foggy mornings with trees laden with frost creating photographic opportunities. Birds are starting to come back with a few spring migrants already present, and more of the first wave expected soon.

Gretchen Mehmel reported from the Beltrami Island State Forest in Lake of the Woods County this week. On the weekend, a SPRUCE GROUSE was seen north of Faunce, RUFFED GROUSE east of Norris Camp, and a NORTHERN HAWK OWL on the Roosevelt Road north of the Faunce-Butterfield road. At Norris Camp there were PILEATED WOODPECKER, GRAY JAY, and PINE GROSBEAKS.

Larry Wilebski reported WHITE-WINGED CROSSBILLS in Lancaster, Kittson County, on March 3. There were HORNED LARKS along roads in the county this week.

In Otter Tail County, Wayne Runningen reported that numbers of TRUMPETER SWANS have wintered along the Otter Tail River. 73 were at the Prairie Lake inlet north of Pelican Rapids On February 28, and 50 were at Riverview Sanctuary in Fergus Falls.

Brad and Dee Ehlers saw an AMERICAN KESTREL on a power line near Alexandria on March 1.

Please report bird sightings to Jeanie Joppru by email, no later than Thursday each week, at [email protected] OR call the Detroit Lakes Chamber’s toll free number: 1-800-542-3992. Detroit Lakes area birders please call 847-9202. Please include the county where the sighting took place. The next scheduled update of this report is Thursday, March 11, 2010.